Chapter 2 of Distilled in Oregon includes an account of Eugene City Distilling Company, Oregon's third commercial whiskey distillery. The entry gives 1856 as its founding date and locates it along the millrace that looped through what was then the northeast corner of the city. I based these statements on an article published in the Dec 8, 2001 edition of the Register-Guard, "Millrace played important role in Eugene's History." Author Bill Bishop provided a timeline for the history of the millrace, which included the following entry:


1856: Eugene City Distilling Co. becomes the major industry,  paying more taxes than any other while producing 70 gallons of whiskey per day at a time when the city's population numbered about 200.

The reference to taxes was undoubtedly based on the brief description of the distillery in A. G. Walling's 1884 book, History of Lane County (the passage is reproduced in Distilled in Oregon). Walling gives the distillery's location as being "situated on the bank of the river in the northeast portion of the town." This would put it toward the terminal end of the millrace, where several flumes exited the mill pond, each damned to provide kinetic energy to the mills.

Neither the Walling book nor the Bishop article give any information about the owner, provide a  reason for the distillery's closing, a date for that event, or any information about the whiskey itself. I looked at IRS tax rolls for the late 1860s and early 1870s and saw no collections from the company subsequent to 1870, so it seemed reasonable to assume that it closed in 1870 or 1871. The latter year coincided with the arrival of the rail line from Portland, and it was my belief that the improved availability of bourbon (by far the most popular spirit in Oregon at the time) rendered the Eugene distillery's whiskey uncompetitive. It also seemed reasonable to assume it was made from wheat, given that was the case with most whiskey made in Oregon during the nineteenth century.

I wasn't happy about not knowing the identity of the distillery owner, or its supposed location on the millrace (a distillery does not require much in the way of kinetic energy, and property along the flumes was probably priced at a premium), but there wasn't time to revisit the topic before the publisher's submission deadline.

In February I resumed research on the Eugene distillery, starting with the 1860 census rolls for Eugene. I found no one listing their occupation as distiller (or brewer, for that matter). A follow-up review of census data for all of Lane County was equally unsuccessful.

Examination of IRS tax rolls for the mid 1860s revealed collections from Louis Behrens, "Brewer and distiller," for both beer and whiskey (one entry from early 1868 shows $64 collected for 32 gallons of whiskey).

I was already familiar with Behrens, having seen his advertisements in most issues of the Eugene Guard from the late 1860s...none of which mention whiskey. 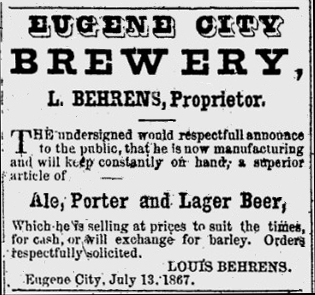 Checking the COMMERCIAL AND MANUFACTURING INDUSTRIES section of History of Lane County, I found the following entry:


EUGENE CITY BREWERY. This enterprise is at present owned by Mr. Vogl, and is located on Ninth street. It was originally started by L. Burns, on the site that it now occupies, in 1866 - it subsequently passing into the hands of Henry Hagerman, who, on account of injuries received, disposed of it to a Mr. Miller. In 1881 it was purchased by the present proprietor. It has a capacity of five hundred barrels a year.

Additionally, there is this blurb in the September 21, 1867 issue of the Guard, the wording of which strongly suggests that the opening of Behrens' brewery was fairly recent:


THANKS - We are under obligations to Victor Behrens for a bucket of splendid Lager this week.  The Eugene City Brewery is now making as good Ale and Lager as any other Brewery in the State, and there is no longer any excuse for patronizing Corvallis.  Encourage home enterprise and industry.

"Corvallis" referring to Joseph Hunt's Corvallis Brewing Company which, until Behrens' operation, was the closest brewery to Eugene (the newspaper's comment about patronage is a case of "biting the hand that feeds you" because Hunt ran an advertisement in nearly every issue of the Guard).

Combining the Walling book's location for the distillery - "situated on the bank of the river" (page 403) - with that given for the brewery - "located on Ninth street" (page 440), would put it about three blocks east of the millrace, but still within the industrial district.

As mentioned earlier, Behrens never mentions whiskey in any of his advertisements; it may be that he was selling all he could make to local saloons and simply didn't need to advertise it.

So from what was Behrens making his whiskey? Given that he probably learned brewing before leaving Germany, the grain in his beer was probably all malted barley, and the simplest approach would have been to use the same mash for the whiskey. Concurrent high-volume production of beer and whiskey would have required separate fermentation tanks if the two products used different mash bills, and I doubt Behrens went to that much trouble (admittedly this is just speculation).

If I'm right then Behrens' whiskey was rather like a very young unpeated single malt Scotch. Perhaps the closest modern analog was the original release of Rogue Oregon Single Malt, which was only 90 days old. The current release is two years old and, at 80 proof, is probably a lot mellower than the whiskey made at the Eugene City Distillery, which was probably barreled for only a few months and sold at 100 proof.

Moving forward in time and checking information sources, I find, in the 1870 census, an additional child in the Behrens household: Louis, born in 1861. He was not a "Junior" because his father's middle initial was B and the younger Louis' middle initial was O.

The elder Louis Behrens died in November of 1871, so the sale to Henry Hagerman would have been by Joanna. It may be that distilling (and possibly brewing as well) had ceased sometime before that; the Behrens' final advertisement ran from August 21, 1869 through August 20, 1970, and no new ad followed that.

It's interesting that Joanna is listed first, and Louis as just an agent, and suggests that his involvement with the operation had been scaled back.

Henry Hagerman and his partner August Werner acquired the business in 1873. There is no report that they did any distilling. It was sold to Mathias Miller in 1875, and to Michael Vogel in either 1880 or 1881.

The Lane County Historical Society has a photograph of the brewery/distillery building.

The following text is printed on the back:


City Brewery, Eugene. Built in 1859 by Louie Burns on the corner of 9th and Olive. Sold to Henry Hagerman, who was scalded to death in the mash tank. Sold again to Matias Miller, who was drug to death by a cow. So it was sold to Joe Vogel and his father Michael Vogel in 1880. In 1890 it was sold again to the Union Ice & Storage & Brewery Co. The only ice & storage plant between Albany & Roseburg. Mr. Joe Vogel remaining as engineer. In 1893 H. Weinhard became owner, Mr Vogel retaining the house and corner lot. About 1900 Weinhard built and operated the Spfld plant selling this to Mr. Stanly who erected the present building. This picture taken in 1883. The men are Louie Burns; Joe Andres; Joe Vogel.

This information is a little disturbing for a number of reasons (and not just the rather bizarre deaths of Hagerman and Miller). First, if the building was constructed in 1859, it couldn't have been built by Louis Behrens, because he did not arrive in Eugene until after 1860. And because the senior Louis Behrens died in 1871, the "Louie Burns" in the photograph would have to be the younger Louis Behrens. If that's the case, then the photograph could not have been taken in 1883 because the younger Louis Behrens was killed in an accident on May 15, 1881. The photograph would have to been taken in late 1880 or early 1881. Finally, there is now yet another location given for the facility; Ninth and Olive would place it four blocks west of the millrace, and seven blocks west of the river.

Again moving forward in time, the next description of the operation is found in the April 25, 1949 edition of the Register-Guard ("Pioneer-Day Millrace Was Valuable to Industry"):


Meanwhile businesses had been booming all along the race. In 1856, Louis Behrens built a brewery, the Eugene City Distilling Co. Thirteen years later it was the chief Industry in the city, producing 70 gallons of whiskey daily, and paying more taxes than any other single firm. The Eugene Ice and Storage Co. is now located where Behrens plied his trade, having been there since 1891, when the conversion to an ice factory and cold storage plant was made, Henry Weinhard, Portland brewer, bought the plant in 1892.

This is the first appearance of the 1856 date and it's certainly an error, perhaps only a typo. Unfortunately it propagated forward to the 2001 Bishop article and ultimately to Distilled in Oregon; hopefully this article will put an end to it once and for all.

The next description I've found of the Behrens operation is in Gary and Gloria Meier's Brewed in the Pacific Northwest (1991). This gives Ninth (now Broadway) and Olive as the location of the brewery and provides another photograph of the building, taken from a greater distance and slightly different angle (unfortunately the Meier's book lacks footnoted references or image attributions, so their sources are unknown). The Meier's book also mentions that while the Vogels were operating it, it was known as the Union Cold Storage, Ice & Brewing Co. They give the date for its acquisition by Henry Weinhard as 1890. Weinhard shut down the brewing and operated the facility as Weinhard's Beer and Ice Depot.

Additional research reveals the building was sold in 1900, after which it was known as the Eugene Ice and Storage Company (Weinhard having built a new facility in Springfield). In 1909 the new owner constructed a new building on Ferry Street, a location which would have been adjacent to the millrace. Apparently the building on 9th and Olive did not find new owners; it was demolished in 1914.

I believe that a combination of strict interpretation of "along the millrace" and the shift in location for the Eugene Ice and Storage Company is responsible for the persistent belief that Behrens' original brewery/distillery was located on the millrace. Located at Ninth and Olive, it was on the west side of the industrial district that developed along the millrace, but was in fact several blocks west of the millrace itself.

Finally, I'd like to address the oft-repeated statement that Behrens' distillery was the city's "chief industry." There were other firms, such as a sawmill and a furniture factory, that  must have employed more people, and probably generated more revenue as well. The distillery was first only in its payment of taxes, and this only because the federal excise tax was so high. It's my view that primacy on this single metric is insufficient to label it the city's "chief industry."

In sum, I'm pretty certain the following is true:

Louis Behrens, a German born brewer, migrated with his family from Oregon City to Eugene in 1865 or early 1866. He purchased a building (possible construction date 1859) at Ninth and Olive and converted in into a brewery. Operating under the name Eugene City Brewery he began selling beer in 1866 or early 1867, and began distilling barley malt whiskey sometime in 1867. In late 1868 or early 1869 he registered the name Eugene City Distilling Company. Peak whiskey production year was 1869; production was lower in 1870. It seems likely that Behrens' health began to fail in 1869; the company ceased advertising in August of 1870 and probably ceased production of whiskey and even beer about that same time. Behrens died on November 8, 1871. Widow Joanna sold the brewery/distillery building in 1873, with the new (and all subsequent) owners operating it solely as a brewery and/or ice making and storage facility.
Posted by Scott at 12:30 PM